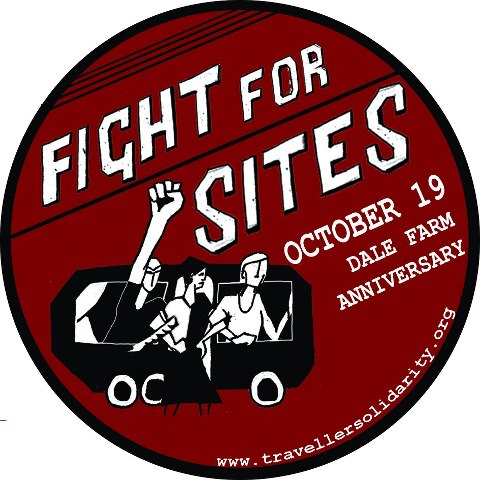 One year on from the eviction of Dale Farm (what used to be Europe’s largest travellers’ site in Essex, UK) this edition of the Circled A radio show on Resonance FM will take a special focus on traveller solidarity and action.

The 30 minute show features two segments. The first, included field recordings and interviews recorded and edited by Patrick and Brian of Dissident Island Radio from their visit to Dale Farm in March 2011. (For the original full-length piece check-out this show: http://archive.org/details/DissidentIslandRadio-04March2011)

The second segment is a telephone conversation with activist and Irish traveller Phien O’Phien as he participated in a recent protest action with the Traveller Solidarity Network on 19 October 2012 – the mass action Fight for Sites which happened on 19 October 2012 targeted the Department for Communities & Local Government – marking the one year anniversary of the eviction of Dale Farm. Protesters vowed to give Eric Pickles a ‘taste of his own medicine’ by launching ‘the eviction to end all evictions’. (Listen to the full-length original interview here: http://archive.org/details/DissidentIslandRadio-19October2012-Episode110)